The Online Contest ("OLC") is a web-based soaring contest open to pilots worldwide. It is hosted by a team of volunteers through the German magazine Aerokurier. The Online Contest is unique in that it is a de-centralized contest. While contests are typically held in a centralized location over an extended period of time, the Online Contest allows you to compete against pilots around the world and make every soaring flight a potential contest flight. SAC pays an annual fee to the OLC which allows all pilots in Canada to participate without charge. The OLC does accept donations from pilots that use the OLC which helps support further development of the site.

How Do I Participate?

Why is it Fun?

Before the OLC existed, pilots would go fly, have a great flight, and then they kept it pretty much to themselves. Sure, we would find out that so-and-so did a 500 kilometer triangle, or another pilot as able to do a long flight on a blue day, but, apart from the 'hangar flying' discussions, we never really knew exactly what everyone was able to accomplish on a given day. And if you do not know what is possible, you may not be willing to push yourself to try that same flight yourself.

The OLC gives you the ability to compare your flight to flights flown on the same day by not only your fellow club members but pilots around around the world. You can see how your flight stacked up against pilots flying in the French Alps or in the Western US. The OLC makes every flight a competition flight, and it is the competition aspect that can push you to improve your flying skills and challenge yourself, all in the name of bragging rights with your friends and fellow pilots. The OLC also encourages friendly competition amongst clubs in the same region and across the country as all flights flown count towards your club's total points.

The OLC also gives you the ability to download the flight file from a pilot's flight and analyze it using flight analysis software. Curious what is is like to fly on The Ridge in Pennsylvania or in the French Alps. Download flights from those regions and get a first hand look. Today we have access to thousands of flight logs from all over the world. 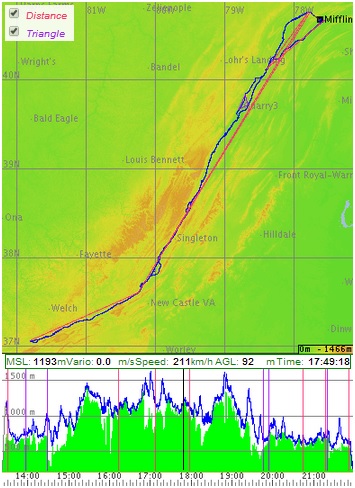 An example of a flight flown on The Ridge in Pennsylvania. Click on the image above to see the fligth on the OLC.

Having Issues with the OLC or Have Questions?

Tony Firmin is Canada's technical representative for the OLC and can help you with any issues you may be having with the OLC and can answer any questions you may have. Tony can be reached by Cette adresse e-mail est protégée contre les robots spammeurs. Vous devez activer le JavaScript pour la visualiser..